Chely Wright Celebrates I Am The Rain 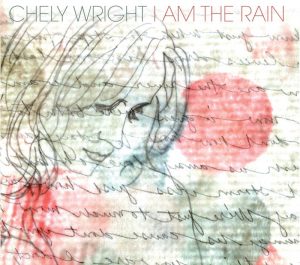 (New York, NY) September 21, 2016 – Award winning, multi-million album selling, singer/songwriter, author, and activist Chely Wright is celebrating the long awaited release of her acclaimed new album, I AM THE RAIN. Released via her own Painted Red Music Group and distributed by MRI/Sony, the album arrived on September 9 and immediately made a positive chart impact. It debuted at #7 on the iTunes Store’s “Top Country Albums,” and on Billboard’s Americana/Folk Albums Chart at #9, Independent Albums Chart at #16, Top 200 Sales Chart at #53, and the Country Albums Chart at #13 – the latter marking Wright’s second highest debut on that chart. I AM THE RAIN is available now in stores and at all online retailers.

Wright further commemorated the day of the release of I AM THE RAIN with a very special performance of the National Anthem at the retirement ceremony of U.S. Air Force Master Sergeant Maria P. Darrow. Wright first met

MSgt. Darrow in 2002 while traveling as part of a USO Stars & Stripes tour of South Korea where Darrow and her then-boyfriend Kevin were both stationed at separate Korean bases. Wright helped Kevin coordinate a surprisemarriage proposal, live on stage in Kunsan Air Base, a memorable moment for both the happy couple and Wright herself. Fourteen years later, the opportunity came to once again surprise MSgt. Darrow – and honor her 21 years of service. Wright marked the occasion with a personal Facebook post as well as a more detailed entry in her always-powerful “Letters From Chely.”

I AM THE RAIN has already begun earning remarkable critical applause, with Slate praising it as “a collection of characters, opinions, and moods that draws listeners into its world… a soulful Americana set that tackles such subjects as religious hypocrisy, forgiveness, and the rudderless, somewhat scary state of being in love.” “The material on I AM THE RAIN finds (Wright) opening and exploring a new musical chapter,” wrote Rolling Stone, “one that is certainly closer to the all-encompassing Americana format than contemporary mainstream country.” “The album, (Wright’s) first since 2010’s LIFTED OFF THE GROUND, is earthy, muscular, mighty and charges the soul with thoughtful wisdom and soul-shaking interpretations,” declared AXS.com. “Wright’s masterful ability of uncovering the deepest and darkest emotions known to mankind is a marvel to behold. What she achieves on songs like ‘Where Will You Be,’ ‘Pain,’ and ‘Next to Me,’ songwriters and musicians dream their entire life of creating stories half as resonating and important. Much like the great female storytellers who came before her, I AM THE RAIN is Wright’s career-defining moment – as much as HEART LIKE A WHEEL served to cement Linda Ronstadt as a force to be reckoned with or Carole King’s TAPESTRY redefined the singer-songwriter mold.”

Wright will introduce her countless fans to I AM THE RAIN with a series of much anticipated US live shows. The dates – which see Wright sharing an exclusive double bill alongside Amy Ray – begin September 29th with a sold out show at Annapolis, MD’s Rams Head On Stage and then continue through December. For complete details and ticket information, please visit chely.com/tour.

Chely Wright’s heroic personal and creative journey has inspired millions while inalterably changing the world of country music and beyond. Now, after more than five years away from the spotlight, I AM THE RAIN truly affirming her as an incandescent, once-in-a-lifetime artist.

I AM THE RAIN sees Wright continuing to develop her overall sonic palette. Deeply personal songs like “What About Your Heart” and “Pain,” (featuring backing vocals from the one and only Emmylou Harris) reveal a striking new freedom as a songwriter, their heart-hitting melodies more than a match for her frank and incisive lyricism.

I AM THE RAIN also showcases a number of songs co-written with Henry, among them the provocative “Holy War” and “See Me Home,” the latter described by Wright as “the rudder of the whole album.” Other highlights include “At The Heart Of Me” (co-written with Henry and longtime friend Rodney Crowell), as well as a powerful rendition of Bob Dylan’s timeless “Tomorrow Is A Long Time” featuring backing vocals from acclaimed indie-folk duo The Milk Carton Kids. As unflinching and adventurous as it is heartfelt and inspirational, I AM THE RAIN begins the next remarkable chapter in Chely Wright’s increasingly historic body of work.